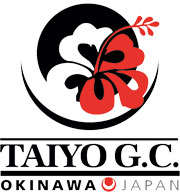 Although it replaced a legend in the form of the Awase Meadows Golf Course, the rich and historic legacy lives on at the new Taiyo Golf Club. The name Taiyo is derived from the Japanese kanji "sun", the literal translation is "Golf Club of the Sun."  Taiyo is located in Uruma City near the Kurashiki Dam in central Okinawa. Golf awaits on a visually stunning 18-hole layout that unfolds across 247 acres of rolling fairways, lush wetlands, scenic vistas, dramatic elevation changes and large, well-manicured greens with subtle breaks. So reserve your tee time, gather your clubs, and ready yourself for a satisfying new experience at what we believe is among the finest U.S. Marine Corps golf facilities in the world.

Tee times can be requested via the "Book Your Tee Time Here" button on this page.

Over a period of 60 years, Awase Meadows Golf Course has built a solid reputation as one of the preferred courses on the island with its narrow, tree-lined fairways, cool ocean breezes, a friendly knowledgeable staff, and stunning views of both the East China Sea and the Pacific Ocean.

During 1948, the first summer Olympics since World War II was held in London, and scientists introduced the Big Bang Theory for the first time. Ozzy Osbourne, Samuel L. Jackson, Garry Trudeau and Al Gore were born, and the Hell's Angels were established in Los Angeles. It was a time of legends passing (Mahatma Gandhi, Orville Wright, and Babe Ruth passed that year) as well as a time for hope.

On Okinawa, the destruction of World War II was still apparent, however it was also a time of new beginnings on the island. For the first time, aspects of American culture, such as rhythm and blues, rock and roll, A&W Root Beer and golf were introduced to Okinawa.

The First Golf Course On Okinawa 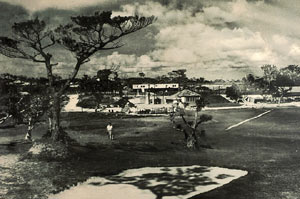 Awase Meadows Golf Course earns the distinction of being the first course ever built on the island of Okinawa. Initial construction for the course began in 1946. Two years later, the United States Army held the grand opening of the course, which featured nine holes and manicured sand greens—no simple feat considering the amount of work needed. Not surprisingly, the course became immensely popular, and soon course management realized that nine holes would not continue to sustain the appetites of the growing golfing community on Okinawa.

During the year 1953, the U.S. Army expanded the course to a full 18 holes. As the years progressed, Awase Meadows Golf Course began holding regular competitions and drew players of all nationalities and military personnel of all ranks.

In 1960, a young Marine Corporal by the name of Lee Trevino was victorious at Awase Meadow Golf Course's Chamber of Commerce Open. This victory was only the first of many for Trevino, who would go on to multiple wins at the U.S. Open, British Open and PGA Championship. Some postulate that Awase's sand greens played a hand in the improvement of Trevino's game "We had greens covered in sand an inch or two deep" he was quoted as saying in a Time magazine interview.

Awase Meadows finally converted from sand to grass greens in 1960, making the course even more beautiful and a bit more user friendly for its loyal players. The course remained under Army management until 1976, when the United States Marine Corps assumed control of the links. Under Marine Corps direction, the course blossomed, holding multiple large tournaments and hosting golf legends, diplomats and ambassadors. 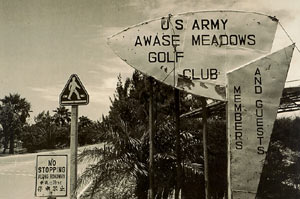 Awase Meadows is still an 18-hole par-69 course today. It features a putting green, a clubhouse with men's and women's locker rooms, a pro shop which features a variety of golfing equipment and a repair facility, state-of-the-art custom club fitting equipment and a restaurant that serves one of the best burgers on the island. The course also features several special events and tournaments throughout the year.

Over the years, the course's staff has even returned something to the people of Okinawa—including helping to tutor a possible Okinawan-born future LPGA legend. Mika Miyazato, a former student of Awase Meadows Golf Course Professional Sonny Gibbs, finished with a record-breaking 16 under 280 at the 2006 Junior World Golf Championship in San Diego, and represented Japan at the Asian Games in Qatar the same year. "[Awase Meadows Golf Course Professional] Mr. Sonny Gibbs, who is a friend and associate of my family, was my primary coach during the critical development stages of my golf swing… between the ages of 10 and 13. Sonny has also provided off/on assistance with helping me with my swing, putting, and helps me keep the mental side sharp…I visit him even now from time to time between competitions. He has been a superb golf coach, a vital golf professional who spearheads junior golf development here on Okinawa, Japan and a friend" says Miyazato.

Since its birth after World War II, the Awase Meadows Golf Course has built a solid reputation as one of the preferred courses on the island. However, sadly, the course's days were numbered. 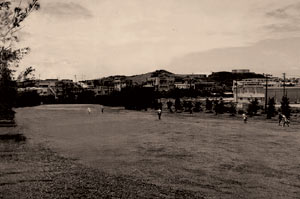 After years of negotiations (the decision to return the land was made in 1996), a conglomeration of landowners collectively decided that the course will be developed into Okinawa's largest shopping mall—a monstrous three-story Jusco. This new facility, which will also house a theater and hospital, will cover almost half of the scenic golf course's property.

And, although watching the last golfers finishing their last round on this venerable course will be a sad day indeed, Okinawa's newest, and possibly the greatest, Marine Corps golf course is just over the horizon.

"The new course will be on the same level, if not better than, many of the current private courses on the island," says Rich Erland, Director of Golf/Golf Course Superintendent at the Awase Meadows Golf Course. This new course, which is currently under construction in Uruma City near the Kurashiki Dam, is slated to be top notch in all departments. Covering approximately 6,800 yards and encompassing 247 acres (compared to Awase Meadows' 5,765 yards and 110 acres), this new course is slated to be completed in early 2009.

The new Marine Corps golf course replacing Awase Meadows, which has been dubbed "Taiyo" Golf Course (which literally translates into "the golf course of the sun"), will feature several improvements and innovations, including greens that are 75 percent larger than Awase's, both front and back nines beginning with par 5s, a full 241 yard driving range and golf learning center and a two-story club house. "It will be a very challenging course, with tight, dense foliage bordering holes, abundant wetlands and ravines, as well as changes in elevation," says Erland. "The emphasis will definitely be on accuracy," he continues.

Although the new course is slated to be light years ahead of Awase Meadows in almost every aspect, one thing will remain the same: the courses mission will be to serve its most beloved customers—the servicemen and women that defend the United States of America. "The Marines will be proud to call this course their own," says Erland. "This golf course was designed and is being constructed with the intention of becoming the top military golf course in the Pacific. In the hearts of many golfers on Okinawa, and many more that have left the island, the spirit of Awase Meadows Golf Course will live on.

Your browser is out-of-date!

Update your browser to view this website correctly. Outdated Browser